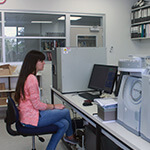 Bio Science developed from the early 19th century when men became more and more interested in nature and started to explore it in a scientific way.

Bio Science deals with the science of living organisms beginning in the microbiological area up to the studies of the biggest living animal on our planet. Bio Science also is concerned with Bio-chemistry which studies the chemical components of life and. Another area of Bio Science is the Botanic which exclusively studies features of plants.

Bio scientists are examining features, behaviour, the evolution and potential usage of a different area in the different field of a living organism. So, for example, marine algae, seaweed, is a quite promising candidate.

Scientists have found ways to produce O2, Nutrition and to fight water contamination with a combination by combining some kind of microorganisms and seaweed.

As a Bio Science intern duties may include: