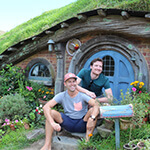 The Best way to gain acting experience in the challenging world of acting is to complete a professional internship within the show business. An acting internship in New Zealand offers the opportunity to work with an international team of actors as well as the opportunity to travel this beautiful country at the same time. New Zealand Internships offers placements in dancing, theatre and drama performance.

The choice is yours!